Crystal Palace and the Dinosaurs, 2003

When I started to think about my second solo show at asprey jacques, I had been living in London for a year (in Delfina Studios, thanks to a grant from the Berlin Senat), and I had the opportunity to stroll around the city. One day we ended up visiting the Crystal Palace grounds in Sydenham[1] and saw the odd dinosaur statues, the first of their kind[2]; the steps which had once been the entrance to the enormous glass and steel dome of Crystal Palace, flanked by giant sphinxes, that now lead nowhere since the building burned down; we saw the TV-tower[3] and finally sat down in a greasy spoon café for tea. A naive mural, depicting the park grounds with some dinosaurs, adorned the café walls. 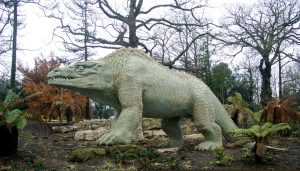 Only when I looked at my photos later did I notice that I had focused twice on the same two young girls, first when they took photos of each other next to one of the sphinxes, which is covered with graffiti and seems to weep blood, and later in the café. They were both so English, with their pale skin, the little handbag and the well-brushed hair. Somehow I thought it was very touching, the way they were having a “grown-up” outing together, visiting some cultural relicts that are now a destroyed symbol of the defunct British Empire.[4] 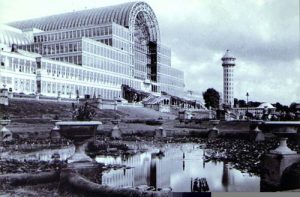 The show had two rooms, one with Entrance to the Crystal Palace and the smaller one in the back with Dinosaurs. I painted orange and mud green stripes on the walls and put up postcards I had bought in the Crystal Palace museum shop: the Crystal Palace looming over Norwood; a photo of a local dignitary examining the aftermath of the 1936 fire; the “first Caribbean born bus conductor” of London on service on the line to the Crystal Palace grounds; Bengal Lancers practicing drill (“Indian Soldiers fought in France, in the Persian Gulf, and in the bloody and futile conquest of Mesopotamia”).

The girls know probably very little about what was going on before their lives began.[5]

The Crystal Palace was essentially a giant glass and iron greenhouse, bigger than St. Paul’s cathedral in Rome, somewhat like the later Buckminster Fuller domes that turned out to be perfect homes for exotic plants in botanical gardens. Its creator, Joseph Paxton was a garden designer by trade who had befriended the Duke of Devonshire while planning greenhouses for his gardens. The Crystal Palace, some 84.000 m2, was built to house the Great Exhibition held in London’s Hyde Park in 1851.
Prince Albert, head of the Society of Arts, conceived of the exhibition to impress the world with Britain’s industrial achievements. Countries including France, the United States, Russia, Turkey and Egypt all attended with exhibits falling into four main categories – Raw Materials, Machinery, Manufacturers and Fine Arts.
“The Palace was designed by Sir Joseph Paxton. After the Great Exhibition finished in October 1851, he had the idea of moving it to Penge Place Estate, Sydenham as a ‘Winter Park and Garden under Glass’. Penge Place, now called Crystal Palace Park, was owned by Paxton’s friend and railway entrepreneur Leo Schuster. August 1852 saw the rebuilding work begin and in June 1854, the Crystal Palace was re-opened in its new location by Queen Victoria. The building on the whole was enormous – 1,848 feet long and 408 feet wide, including two huge towers and many fountains with over 11,000 jets rising into the air.
The palace and the grounds became the world’s first theme park offering education, entertainment, a rollercoaster, cricket matches, and even 20 F.A. Cup Finals between 1895 -1914. The site attracted two million visitors a year and was also home to displays, festivals, music shows and over one hundred thousand soldiers during the First World War.
Unfortunately, the Crystal Palace was also cursed by bad luck and financial crisis. In 1861, the Palace was damaged by strong winds and on Sunday 30th December 1866 a fire broke out destroying the North end of the building along with many natural history exhibits.
In 1892, one person died in a hot air balloon accident and eight years later, another was trampled to death by an escaped elephant.
Although the palace saw many successful years and millions of visitors, financial problems plagued the Palace. Its sheer size meant it was impossible to maintain financially and it was declared bankrupt in 1911. A trust was set up and they soon employed Henry James Buckland as Manager of Crystal Palace. However, it was the night of 30th November 1936 that saw the most devastation. Henry Buckland and his daughter Crystal, named after his love of Crystal Palace, were out walking their dog and noticed a small fire at the Palace. This soon escalated and a huge fire broke out across the building. By morning most of the Palace was destroyed.” http://www.bbc.co.uk
[2] The dinosaurs belong to the world’s first ‘Dinosaur Park’, which opened in 1854. It was conceived by Sir Joseph Paxton, the designer of the Crystal Palace gardens. With the help of some experts on anatomy and prehistory the life-size sculptures, the very first attempts on palaeontologic reconstruction, were sculpted by Benjamin Waterhouse Hawkins.
The dinosaur park was built six years before Darwin himself had published his Origin of Species, 30 years after the discovery of the first dinosaur bones, and not everybody was happy about these lively reconstructions of “terrible lizards” that, according to the Bible, couldn’t have existed. Julia Voss, who has studied the history of imagery that was used for the defense and illustration of Darwinism, told me that even today, some American Creationists firmly believe dinosaurs had been created by God at the same time as mankind, some 4000 years ago.
At that point we decided that mankind should temporarily turn into dinosaurs and had a ‘Dinosaur’-evening dedicated to all things dinosaur; we dressed up as dinosaurs, told dinosaur stories and learned a lot about them, especially from our expert friend Julia Voss.
See also: Mc McCarthy, Steven, Crystal Palace dinosaurs – The story of the world’s first prehistoric sculptures, published by the Crystal Palace Foundation.
[3] The elegant tower began operating on 21 December 1957 and since then has provided most of London and Southeast England with television.
The shop of the Crystal Palace museum sells the very interesting video by Jan Leman JLB – The Man who saw the Future as well as Television and Me – The memoirs of John Logie Baird, edited by his son Malcolm Baird.
http://www.crystalpalacefoundation.org.uk
[4] I take it from the guestbook of the site of the Crystal Palace museum that there are still some Brits around who are Victorians in their hearts:
„Patricia Tomlinson, Tuesday 28th June, 2005
Crystal Palace was first built for the Great Exhibition of 1851.
We had the Great Exhibition of 1951 and hopefully there will be another one in 2051.
I won’t be around for that one, but wouldn’t it be nice to come back to the first exhibition buy building it along the lines of the Crystal Palace – on the Crystal Palace grounds – to encompass the exhibition of all the cultures from around the world – for generations to come.
I have looked at the pictures of the interior of the Palace taken in 1859 and just marvel at what the Victorians were able to achieve.
Just think what could be achieved with the technology we have now.

Tuesday 12th July, 2005
i have just found a certificate awarded to my great grandfather in 1884 it reads the international potato exhibition crystal palace
first class certificate 8/ 10/ 1884 awarded to mr ellington
for potato Ellingtonia grown for the royal horticultural society.
the potato seems to be named after him i wonder if the potato has survived. if it did it survived him and the crystal palace.”
http://www.crystalpalacefoundation.org.uk
[5] „The message, that even a walk in the park is tainted by history, suffuses these simple paintings with melancholy. Is Majewski suggesting that ignorance is bliss?“
Martin Coomer, Antje Majewski, Time Out, 5-12.2.2003