The first object in my collection of World of Gimel appeared in the summer of 2008, while I was creating a science fiction scenario for the Dubai Düsseldorf exhibition. The scenario involved me working together with a biotechnology company to develop a living artwork: the Entity. It was a living organism that has no sensory organs and cannot reproduce; instead it consumes itself from the inside until it is mummified: a monad. In the Pavilion of the Entity, its sole purpose was to serve as a point of contemplation and reflection: What is this thing that is no more than a being, a living, dying thing that has no relationship to anything, no exchange with the world and no metabolism? And what are we?

I searched the Internet for an organism to model it after. I imagined it as maybe a round fruit, possibly one that is hairy or stinks. My search for “hairy balls” did not lead me to fruits, so I tried “fruit + ball” and ended up with a so-called “hedgeapple” or Osage-orange. I changed the colors and painted the thing in the hands of a patron as she hands it over to the care of the Entity Pavilion director in 2044. 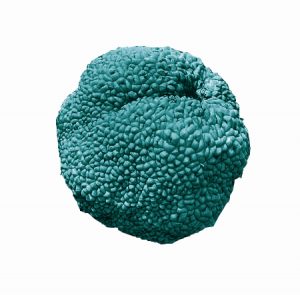 Unfortunately, it turns out that people cannot stand being unable to attribute any meaning to this thing. Rather than the biomorphic Pavilion of the Entity, Kunsthallen are built in Dubai and Düsseldorf, where the thing is cultishly venerated (2056). 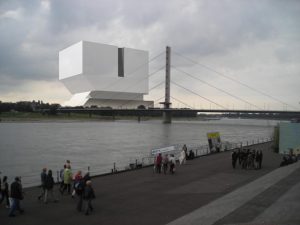 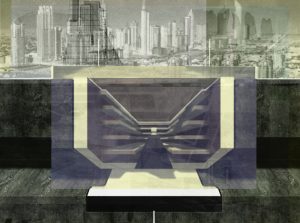 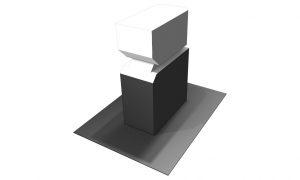 Whole pilgrimage centres emerge (architectural designs: Noffice, Miessen / Pflugfelder). The Kunsthallen have a monumental architecture and a perfect, modernist facade. As for the shrine that houses the shriveling Entity, it looks as though one of John McCracken’s gleaming steles has buckled and caved in; it now resembles a Prada display.

There is an unspecified catastrophe a few decades later—a revolution or a war—and the Kunsthallen are destroyed. What remains is a decorative element and a glass cube containing the mummified Entity, which—in the year 2101—is now in the hands of a greengrocer who had taken part in the looting.

This story is about the question of the living and the dead in art. How can life be preserved and conveyed, and what is the significance of this mummification process? As much as museums strive to allow life to take place inside of them, they remain above all places for dead objects. These things, whether a painting, sculptures, medieval suits of armour or minerals, are carefully and expensively coffined and painstakingly preserved. Why? What role do these things play in the visitors’ formation of the self, in their connection to the dead?

Since 2012, Entity is traveling the world, as part of the exhibition Future Perfect by IfA. At each new destination, Antje Majewski commissions an author of that country to write a new text to replace her own original science fiction narrative. Many possible futures – or future perfects – are all plausible narratives to be read as part of the Entity.