Conversation with the artist and philosopher Issa Samb in his yard in Dakar. Issa Samb talks about our responsibility to help objects move in the world, while respecting their history and origin, even in the tiniest object made in China. The charge that objects carry derives ultimately from the same force that also fills us.

In the second half of the film Issa Samb unexpectantly tells Antje Majewski to listen to a big shell that she had brought with her, and guides her into a trance in which she describes the inside of the sea and hears a voice singing in the shell.

On a trip to Senegal, the photographer Leonore Mau and writer Hubert Fichte investigated the practice of psychiatry in Fann, where Western medicine was applied along with the traditional methods of N’doep.[2] Laboratoire Agit’Art also participated in attempts to find a new form of psychiatry that uses African knowledge. For Fichte and Mau, their travels to Africa were also an attempt to establish a link between the Afro-American religions and the Brazilian Cadomblé, which they had been studying closely, in the hope of reconnecting them with their origins in West Africa. Though neither allowed themselves to be initiated, they did take on an important task: they brought the chants of the Casa das Minas from Brazil back to the place from which they came, to the court of the king of Abomé.[3] The Casa das Minas priestesses wanted to know if these chants were still correct after 500 years of exile in Brazil. They gave Fichte and Mau a glass bead necklace as an identifying sign, which was inspected pearl-by-pearl in Abomé by King Laganfin Glele Joseph, who acknowledged it. After Hubert Fichte’s untimely death, Leonore Mau had to return this necklace to Brazil alone.
Mau’s photograph from the book Petersilie[4] shows a boat heaped and covered with shells, like a freight shipment for Yemanja, sea and love goddess to the Afro-American religions. Gifts were taken into the sea in her honour, pushed into the water on boats. Yet the caption reads: “A souvenir merchant from Boca Chica has constructed a magic ship for the tourists.” 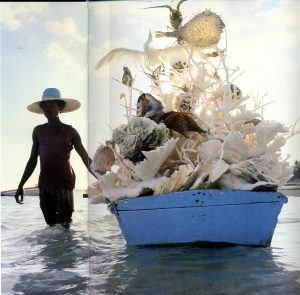 There is a passage in the book Forschungsbericht[5] where Hubert Fichte describes a failure. They had travelled to Belize and had tried to find stories there, secret recipes for trance drinks. But they were fooled, and not allowed into the rites. Fichte found not a single opportunity for homosexual encounters. They simply could go no further. Then Fichte suggested to Mau that she photograph white eggs against a white wall “for practice”. Mau was insulted and said she didn’t practice. She was not interested in purely formal gimmicks, or proof of craft and skill. 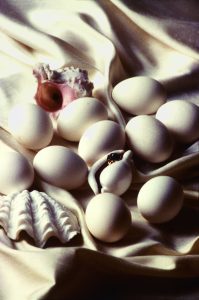 Then, long after Fichte’s death, she photographed the white eggs after all in her Hamburg apartment (on a white cloth) and called them Fata Morgana. They appear together with shells that could have come from the “souvenir merchant’s” blue boat. Sitting in a seashell–which resembles a white egg–is a ring.

[1] Scientifically speaking, it is not a shell but a gastropod seashell (shell of a sea snail) See: Appraisal.
[2] Leonore Mau, Hubert Fichte: Psyche. Annäherung an die Geisteskranken in Afrika, Ed. Ronald Kay, Frankfurt/Main 2005.
[3] Unlike Pierre Verger, Mau and Fichte did not actively participate in ceremonies. Pierre Verger, a French ethnographer and photographer, lived in Brazil and not only researched Cadomblé, he also allowed himself to be initiated as an oracle priest (babalawo), taking the name Fátúmbí. A babalawo can use cowry shells to predict the future. On this trip, Verger checked the names of the Yoruba gods. In Explosion, Hubert Fichte describes how he tried to get Verger, to give him the recipes for secret trance drinks and his disappointment when he discovered that “The Pope” had been giving him the run-around the entire time (Explosion, Roman der Ethnologie, Frankfurt/Main 2006).
[4] Leonore Mau, Hubert Fichte: Petersilie, Frankfurt a. M. 1987.
[5] Hubert Fichte: Forschungsbericht, Frankfurt/Main.1989/2005