In the summer of 2008, Delia Gonzalez and I flew to Paris to witness a tarot reading by Alejandro Jodorowsky in a small bistro.[1] He goes there on Wednesdays, but not always; you have to call the café the same day to find out whether or not he will come. He finally appeared after many hours of waiting, but it seemed that we were not among the ones that had been chosen. Everyone there puts his or her name in a little basket, makes a 5 € donation to the bistro, and the first ten people whose names are drawn are given a reading. Very different people had come – from young comic fans to old South Americans that had come for the tarot. Jodorowsky was very much focused on the people he was speaking to, but all of it could be heard and even commented upon by the others.

I started dreaming about showing him my objects. Somehow I was able to get his phone number in the summer of 2010. He said that he had to do another psychomagical act in Argentina, and I should give him another call in the first week of December. I booked a flight and called him from Paris. I was allowed come over. He lives very close to the cafe where he had been reading tarot cards, in one of the grand, old Parisian apartments. With the exception of to two cats jumping around, he was alone – just working at the computer – and he let me in without knowing anything about me.

I placed my objects on the table. I had forgotten the Buddha’s Hand in Berlin; the Hedge Apple was only virtual and I had not yet added the White Stone, so there were only four. Jodorowsky wrote their meanings on a Post-It note.

The Shell:
Un coquillage pequeño puede ser el esqueleto de un océano.
A little shell can be the skeleton of an ocean.

The Teapot-Hand:
Por tu mano abierta puede derramarse todo el amor del universo.
All the love of in the universe can pour from your open hand.

The container with the black ball:
Dentro de cada espiritú anida la vacuidad.
In every spirit nests the void.”

He said: the things themselves speak a language that we only feel, but are unable to speak. But it can be translated. My choice of objects is supposedly my way of expressing myself in the world, a reflection of my subconscious. I asked him to imagine the objects as being completely independent of me. Of all of them, it was the teapot hand that spoke to him the most. “I like that very much, it speaks to me. […]   The open hand – the whole world can go through the open hand. This hand, which is half open as a teapot, that is the hand that gives. And what I give, I give myself. To receive the world is to give to the world.” I told him that is how he seemed to me when he was doing tarot readings. Yes, but he’s no saint. “Every Wednesday I imitate saintlyness. Saintliness is to serve the other. Without judging him. […] Without anything in return. Simply for the pleasure of doing it.”[2] Giving to people, that was something he assumed that a profane saint would have to do, but it costs him great deal of effort. Everything a person could use to define themselves, such as gender, age and nation, are only imitations, not the essence. Still, he’s been imitating holiness for decades! “And from imitation to imitation, there are moments when it succeeds.”

On his shelf, I had seen three golden blocks of clay – painted – which reminded me of the gold ingot that El Hadji Sy had given me. Jodorowsky told me, “My son[3] has paid me for everything I have done for him. With fake gold. There was lots of it, but there was so much that I kept only four of them.”Like the false gold ingots from Africa, which had actually been left by the Chinese and had now had been brought to Europe as a gift to me; like Freisler’s “personal bank”,   these gold ingots also undermine the idea of money or represent another form of currency. 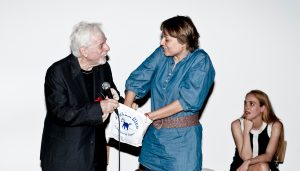 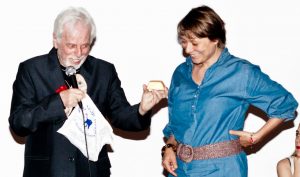 Six months later, I learned that he would be coming to Berlin for a lecture. I wrote him an e-mail asking to borrow his gold ingots for my exhibition. He did not answer. Nevertheless I of course went to the lecture, along with Delia Gonzalez and Mathilde Rosier. The room was very crowded, and Jodorowsky – with his 82 years – had no trouble at all getting us to hold hands and make funny noises… Towards the end, he suddenly shouted into the crowd, “Where is Oscar?” “That’s me!” I cried, stood up and went to the front.[4] He asked his wife, Marianne Kosta, who was sitting to the side, to pass him a plastic bag over the many people sitting on the floor and handed it to me solemnly in front of the entire audience. In it were the gold ingots.

[1] Jodorowsky has worked with mimes, developed the “teatro pánico”, made films such as “El Topo” and “Montaña Sacra”, written comics and books; for him, reading tarot is a fine art. For someone who has worked with symbolic images and actions his entire life, the pictures of the tarot are a way to create a space between the reader and consulter in which images speak. He does not predict the future, but tries to bring the advice-seeker closer to what he imagines or what he is missing. When he does give advice, it often consists – like his psychomagical acts – of a set of instructions for an activity that conjures a strong, symbolic image (“masturbate to a picture of your mother”, “put two gold coins in your shoes and walk around with them all day long.”) and is disruptive at the same time. Jodorowsky is influenced by Surrealism; at a very young age in Chile, he began trying things that were similar to the Situationists: creating scenarios within the city itself, or following his own rules (“go to another district in the city and only turn back when an old lady has cooked you tea.”).
[2] Jodorowsky worked with mimes for a long time, including Marcel Marceau. In his “panic theater” the images that appeared on stage had been choreographed, but at the same time the actors made real, transformative experiences, and the actions on stage also extended themselves onto the viewers. An imitation is in other words not divorced from transformative experiences.
[3] Cristobal Jodorowsky
[4] My email address begins with “oskar” – Jodorowsky clearly did not remember my visit, but it did not matter whether a man or a woman stood up or who had asked him for the gold bars.
[2]Jodorowsky Post-Its
[3]Amy, English translation is there
[4]AM, Die Hand, die gibt. Gespräch mit Jodorowsky Filmstills
[5]AMY It says something to me, that little hand. It’s a generous hand. (….) The whole world can pass through an open hand. So that hand, which as a teapot is half-open, it’s the hand that gives. And what I give, I give it to myself. To receive the world is to give to the world.
[6]Cristobal Jodorowsky, Goldbarren