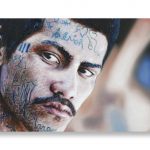 These paintings show members of the Mara Salvatrucha, a gang that is found over Central America and in the Los Angeles region. They are based on photos I found in a local newspaper in Mexico. I tried to track down the photographer but was unfortunately unable to.

They show gang members that are heavily tattooed to make sure they will stay with the gang forever – you can’t really drop out if the gang name is written on your face. These people live in a town on the border of Guatemala and are really bad guys; they even rob the very poor illegal immigrants trying to pass the border on the train.
As in the paintings of the Prisoners, one of the questions arising is that of prejudice – this time prompted by the tattoos that mark these faces as “bad”. While they “describe” the people and pin them down to a fixed identity, they also shift their other possible identities out of focus – of being poor themselves, or being part of a family or being adorers of La Santa Muerte or whatever else. Even if we might not like it, they denote the gang members’ desire to become someone else, and I think they also love them, if they weren’t forced to have them. In fact the tattoos are beautiful and very sad at the same time. 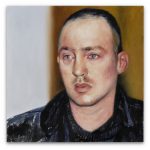 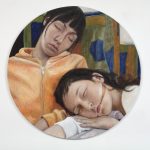 The two girls were sitting in a train from Beidahe to Beijing. Having just grown out of childhood themselves, they disliked children and commented on the crying and shouting that was going on in the train in a language that sounded distinctively non-Chinese, more like Russian. When one small child put his hand on the leg of one of the girls, she brushed it off with repugnance. The Chinese friend I was traveling with said that they might be from Xinjiang, or from one of the former Soviet republics. I called them Mädchen aus den Westlanden (Girls from the Countries in the West), because this vagueness made me think of Yasushi Inoue’s Reise nach Samarkand [1], in which he tries to recollect the earliest Chinese literary sources about the legendary “Countries in the West”. While in the famous “Journey to the West” [2] the “Countries of the West” included India and Persia, the term was later mainly used for Turkistan, and would today include Xinjiang and Uighur on the Chinese side (formerly East Turkistan) and Kazakhstan, Uzbekistan, Kyrgyzstan, Turkmenistan and Tajikistan (former West Turkistan) on the side of the former Soviet Union. The West has traditionally been a source of sorrow for the Chinese, and even today the Han Chinese feel they are quite different from the people from the predominantly Muslim western provinces. Xinjiang is the Chinese province with the most upheavals and unrests (“terrorist attacks”).

[2] The Journey to the West (Hsi – yu Chi) is one of the classics of Chinese literature. The fantastic tale recounts the sixteen – year pilgrimage of the monk Hsüan-tsang (596 –664), one of China’s most illustrious religious heroes, who journeyed to India with four animal disciples in quest of Buddhist scriptures.
See: Journey to the West, a complete translation in four volumes by Anthony C. Yu, University Of Chicago Press, 1956, 1980 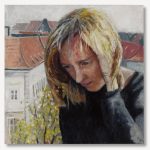 My idea was a woman with a sort of cape, or pelt, as in the film Peau d’âne (1970) by Jacques Demy (Music by Michel Legrand). Beautiful Catherine Deneuve plays a princess who has to disguise herself as a kitchen maid because her father has fallen in love with her. Strangely enough, her disguise consists in the skin of a dead donkey that had been shitting gold. She is wearing it like a cape; the donkey head serves as a hat. This disgusting idea reminded me of the Aztec god Xipe Topec. Sculptures show him as a man, wearing the skin of a sacrificed victim. This even included the skin of the head and face; the strange double mouth that some Aztec sculptures have was actually the widened mouth of the skinned person, through which the mouth of the god underneath is visible. Frequently the skin has an uneven surface; this is because it was worn inside out, with the fat knobs showing. This new skin indicated the beginning of a new year of farming.

I was looking for a woman that wasn’t in her twenties any more and found a model, but somehow the idea with the cape didn’t work out. After two attempts I decided to regard her abundant hair as the “skin” covering her. The idea was that she as well would renew herself, maybe after a depression; and it worked very well with the spring light in her hair. Coming out new and beautiful after a dull winter. 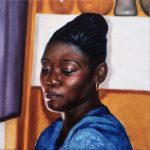 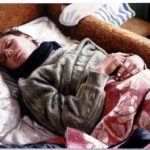 Ingo Niermann, sleeping on a couch in St. Petersburg. 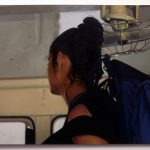 Backpack was my first oil painting after the more conceptual Rosette, the first one painted with the use of a photo in 1994. This is actually the second version, painted three years later, when I had more experience and knew how to do it. It shows a young woman on a ferry in Thailand.