As part of the collaborative project STADT/BILD (Image of a City), the Nationalgalerie is showing Fluids. A Happening by Allan Kaprow, 1967/2015 in the Berlin urban space. Allan Kaprow (1927 – 2006) is one of the most influential and at the same time least known artists of the second half of the 20th century. He coined the term “happening”, but his own work was largely forgotten because of the object-less nature of his artistic practice. Fluids was first created October 1967 at various public locations in California. With the assistance of volunteers, Kaprow built several structures measuring around 9 m long, 3 m wide and 2.4 m high, using ice blocks as his material. Once in place, these ice structures were simply left to melt. In its temporality and materiality, the work represents a challenge to the traditional understanding of art in public space.What endures of Fluids and the happenings of the 1950s and 1960s? How do we approach this happening retrospectively, nine years after the artist’s death? Kaprow had his own answer: “While there was an initial version of Fluids, there isn’t an original or permanent work. Rather, there is an idea to do something and a physical trace of that idea. … Fluids continues and its reinventions further multiply its meanings.”Five “reinventions” of Fluids will be taking place during Berlin Art Week. The Nationalgalerie has invited Berlin-based artists Olivier Guesselé-Garai, Assaf Gruber, Antje Majewski, Agnieszka Polska and Juliane Solmsdorf; Ahmet Öğüt; Alexandra Pirici and the artist’s group Stadt im Regal to create their own contemporary responses to Allan Kaprow’s happening. In addition to these four artistic interpretations, the Nationalgalerie is organizing a reconstruction of the historical action.

The artists Antje Majewski, Olivier Guesselé-Garai, Assaf Gruber, Agnieszka Polska, and Juliane Solmsdorf have founded an artists’ group that is interested in the activist, social, and economic aspects of Allan Kaprow’s happening Fluids. Unlike Kaprow, who always integrated the audience while retaining his artistic authority, this group’s version of Fluids will be conceived and realized by the individual artists working together, each with their own artistic and geographical backgrounds.

Prior to the project, the group not only engaged in detailed discussions about the original happening, it also hosted a day of readings, lectures, and discussions. The artists consider this non-public aspect to be part of their overall reinvention of Fluids. The actual public happening will take place in the Berlin district of Moabit on September 16, 2015, during Berlin Art Week and will integrate local residents, passers-by, and the art public.

The Happening takes place on a public green space on the corner of Lehrter Straße and Seydlitzstraße, 10 min by foot from Hauptbahnhof, next to facilities of the ‘Berliner Stadtmission’–a home for refugees, transitory apartments for former prison inmates, a place for homeless people to warm up and a guest house–allotment gardens, hotels, apartment blocks and a historic prison park. At this location the artists will is to “redraw” the spatial dimensions of the ice block structure in a frame, which they will fill with all kinds of useful objects: plants, books, clothing, and so forth. In this way, they are following the spirit of Allan Kaprow, who in 1958 said the following about new materials in art: “Objects of every sort are materials for the new art: paint, chairs, food, electric and neon lights, smoke, water, old socks, a dog, movies, a thousand other things that will be discovered by the present generation of artists.”

Between 10am and 3pm the artist construct their Give-and-Take-Sculpture made of “materials for the new art,” just to give everything away again from 4pm on. Immediately after its construction the sculpture is left to “melt” by letting people use the objects as they wish. This version of Fluids revives happenings as an art form, with its ephemeral presence and contemporaneity and its element of surprise and the undefined.

Fluid
Fluid idiom. Momentarily we can
Keep our heads above water,
No flood today, although
The street is swimming. 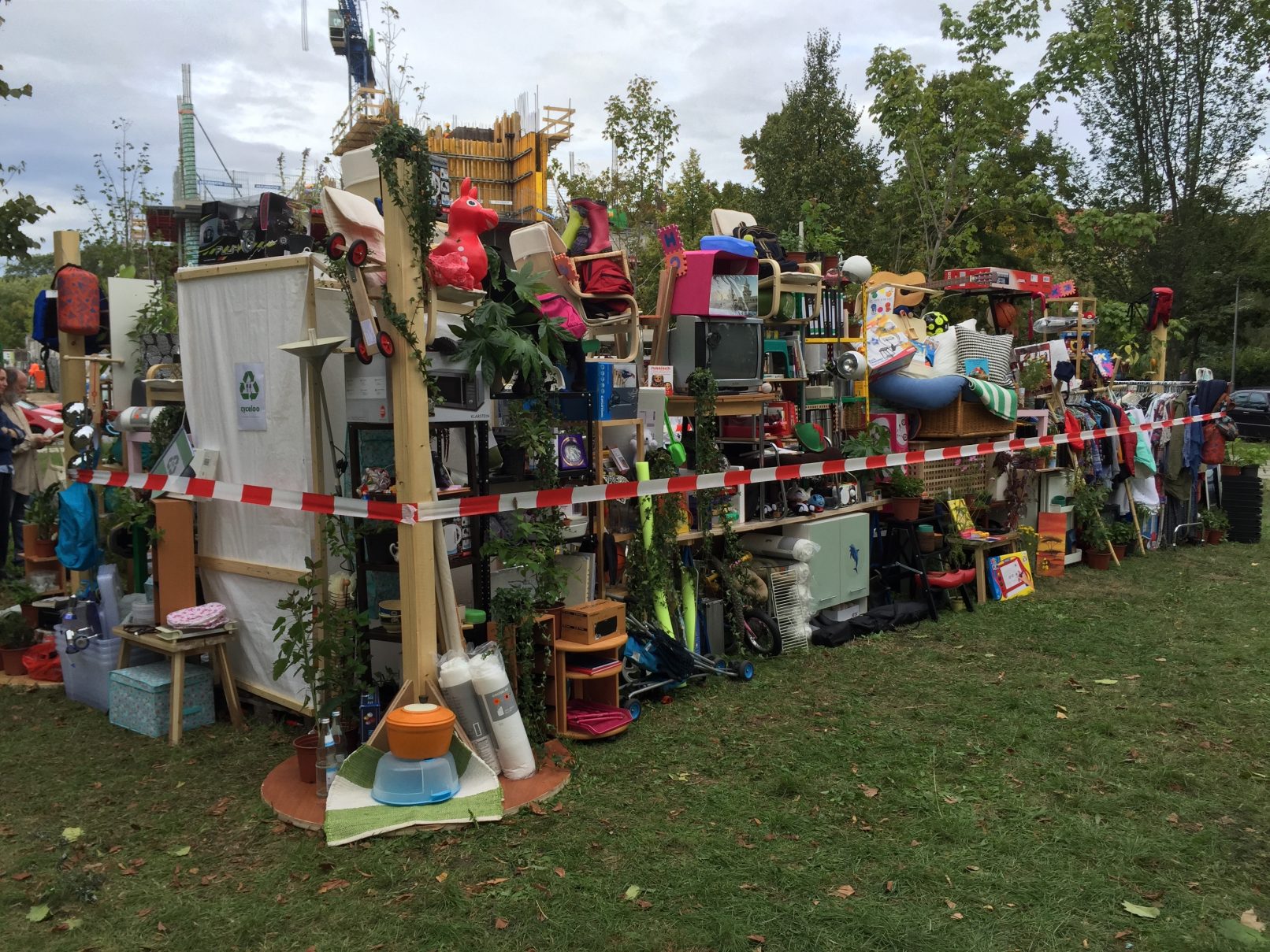 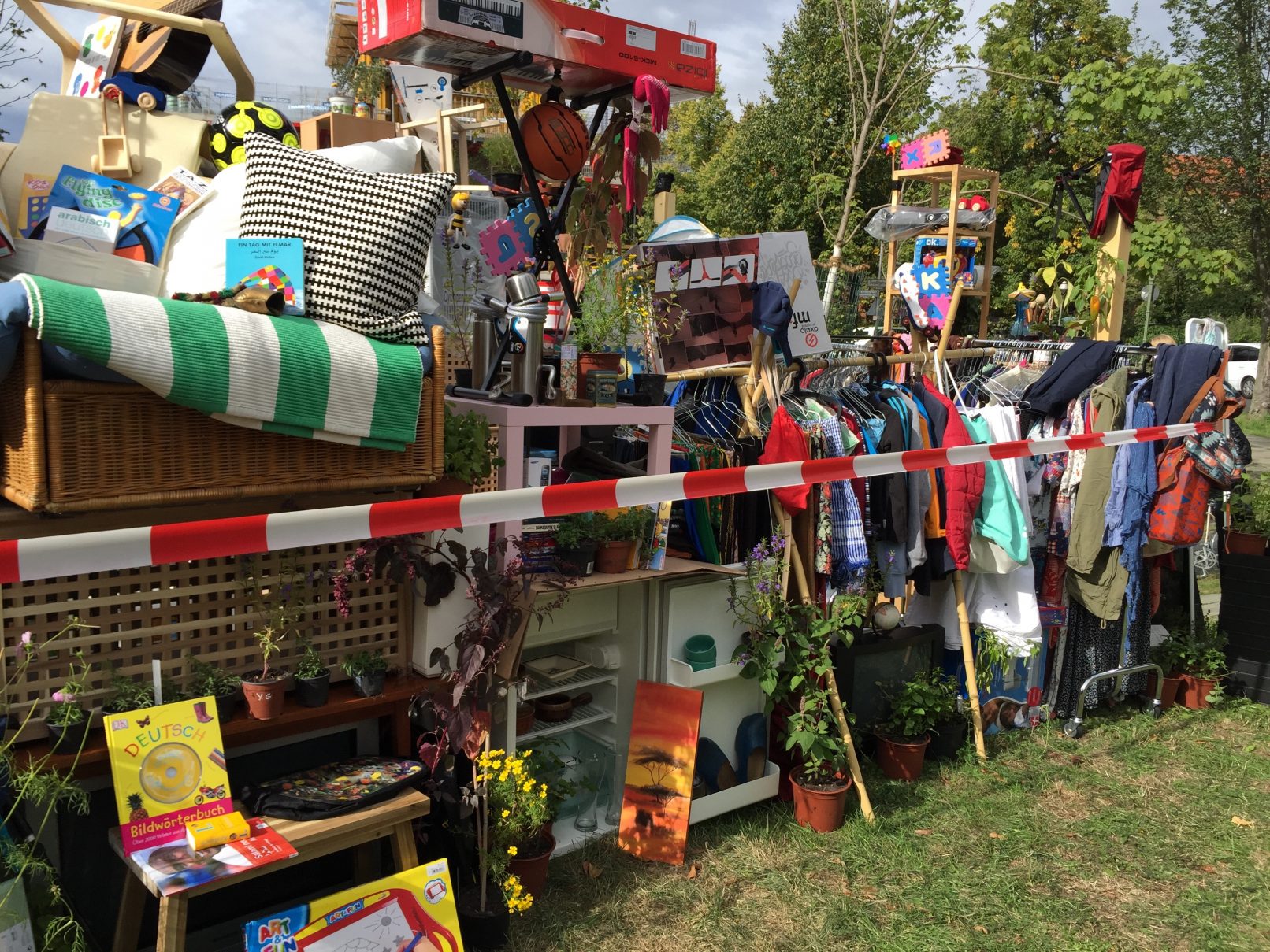 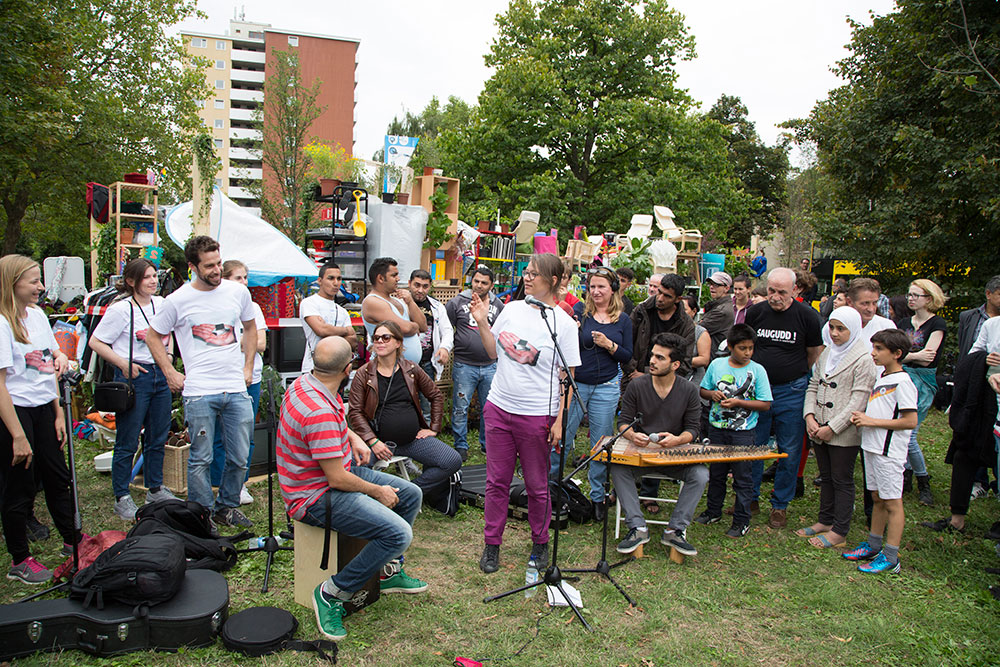 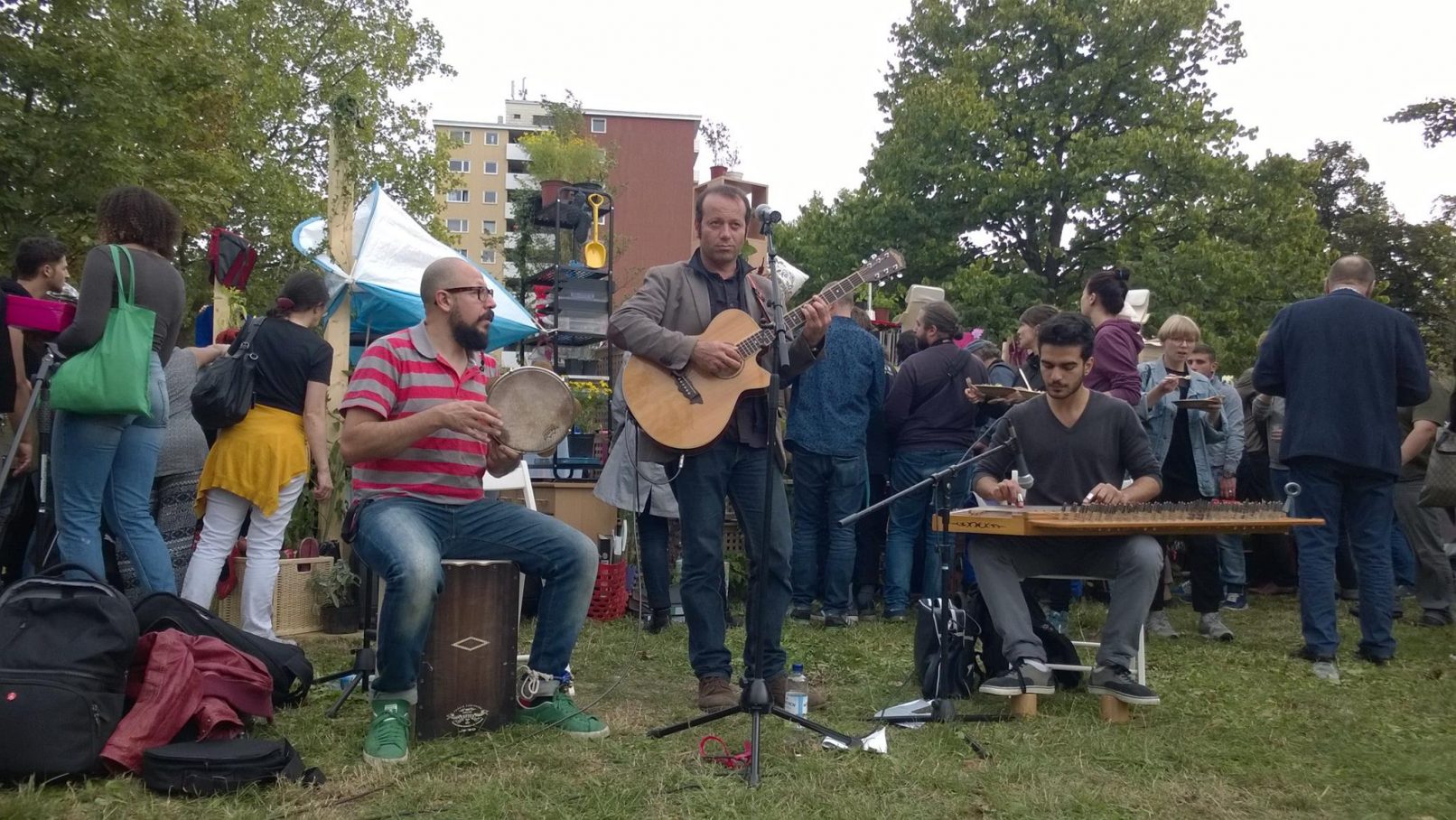 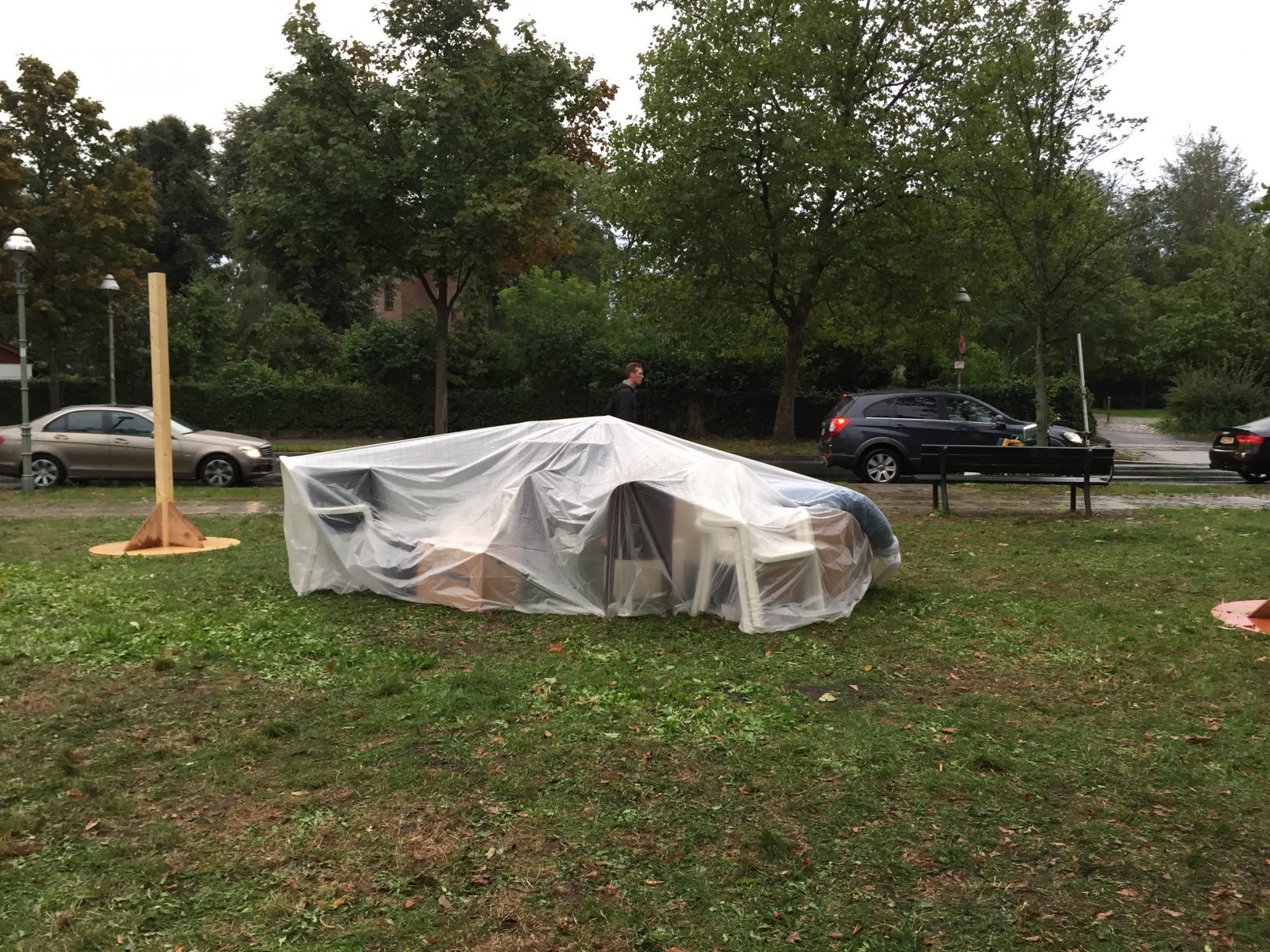